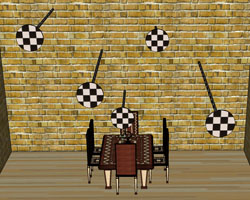 This video shows an early test I did in 2013 motivated by Johnny Chung Lee and his Wii Remote head tracking. While he uses a Wii Remote to perform the tracking, I used a PhaseSpace active optical tracking system we have at the university.

I developed the software using the great Ogre3D rendering engine.

In the first part of the video I only track the head (with one marker).

In the second part I also track the monitor (with three markers, to track rotation as well).