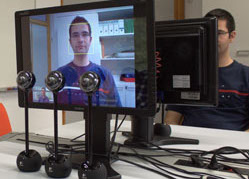 Video conference system based on multiple cameras and face tracking to provide a 3D effect using motion parallax. This is a Bachelor’s Thesis authored by Miguel Ángel Muñoz and supervised by José Pascual Molina and Jonatan Martínez.

Video conference systems have evolved little regarding 3D vision. An exception is where it is necessary to use special glasses for viewing 3D video. This work is based primarily on the signal of vision motion parallax. Motion parallax consists in harnessing the motion of the observer, and offering a different view of the observed environment depending on his/her position to get some 3D feeling. Based on this idea, a client-server system has been developed to create a video conference system. On the client side, a camera that sends images to the server is used. The server processes the images to capture user movement from detecting the position of the face. Depending on this position, an image is composed using multiple cameras available on the server side. Thanks to this image composition, and depending on the user standpoint, 3D feeling is achieved. Importantly, the 3D effect is experienced without the use of glasses or special screens. Further, various composition models or change modes between cameras have been included to analyze which of them achieves a greater improvement of the 3D effect.