This glove was developed during 2008. The main innovation introduced was the use of the USB port, instead the parallel port required by previous versions. To this end, an Arduino Diecimila was used, coupled with a ULN2003 darlington array to feed the actuators. As a consequence, the PWM signal -necessary to change the power of the actuators- was generated by the internal oscillator of the microcontroller, being much more stable.

The glove was designed to carry out a collaborative task in a Virtual Environment, which is described in [3]. Thus, it included only three actuators, located on the index, middle and thumb fingers. Three touch sensors were also added to detect pinch gestures. This vibrotactile device was also supported by a Collaborative Virtual Environment architecture [2], and it was described in a paper presented to JOREVIR [1]. 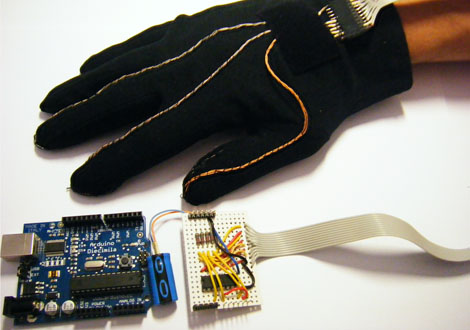 Arduino Diecimila and the Sensaglove v2 circuit soldered on a perfboard. 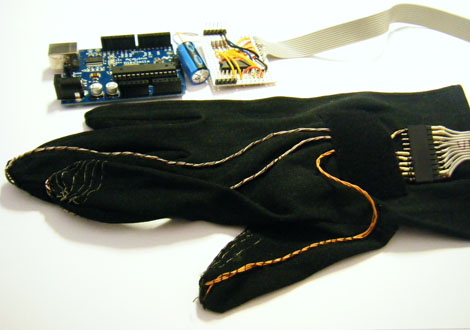 Detail of the conductive thread used to make the contact sensors