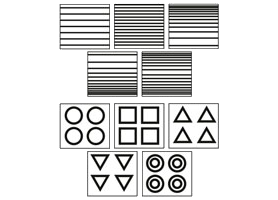 The scope of this research is to evaluate three different haptic feedback methods for texture discrimination in virtual environments. In particular, a Phantom force feedback device, a custom made vibrotactile dataglove and paper palpable prototypes have been used.

This paper describes a new study which corroborates the results of an initial experiment and performs a more in-depth evaluation of some results of interest and, in particular, those based on gender. In the experiment expansion, the number of users has been increased so both genders are even and the texture identification strategies have been analyzed. Finally, statistical analyses have been conducted to assess the differences between both genders, showing a new path which could be explored with new experiments. In addition, the vibrotactile dataglove has proved to have a notable behavior in the detection of varying grating textures, and it is even useful to identify shapes.